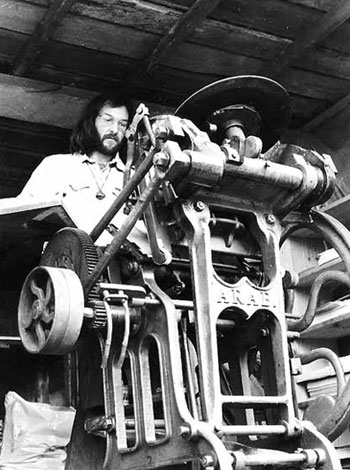 Small Bore Book’s forthcoming title, Imogen, by Joanna Margaret Paul, is a tribute to the close collaboration between the author and printer Alan Loney.

Loney, who founded and operated the Hawk Press (1975–83), the Black Light Press (1987–91), the Holloway Press (1994–98) at Auckland University, and Electio Editions (2004–) in Melbourne, is a crucial figure in New Zealand book-making, both as a printer and writer. Noel Waite describes him in the National Grid as “one of New Zealand’s best exponents of open form poetry, a private press printer of international repute and an uncompromising postmodernist practitioner.”

The short life and death of her second daughter in 1976 led Joanna to compose a book-length waiata tangi – part poetic lament, part celebration. Her words not only conveyed a heart-felt meaning, they also described very specific shapes on the page, where the white spaces could be as telling as the letters. Expressing that complexity and fluidity within the rigid framework of letterpress type forms was Alan Loney’s challenge. Ours was to honour his solution.

An identical reprint of Imogen is impossible. A copy of the first edition could be scanned and reprinted, but the results of that facsimile process can be overtly archival and strangely lifeless. Instead, Small Bore Books put the text through a contemporary version of the book making process with the aim of producing a new arrangement of an admired original.

The Hawk Press edition used cases and cases of the Centaur typeface, which has since been digitally recut and can be googled and downloaded in minutes. In the printed text, subtle differences in the letterforms can be seen, but their spirit abides. With a steel ruler and a lot of pixel-by-pixel nudging, the digital type has been sized and located into a not quite note for note interpretation of the original performance. Some alignments have altered. The weight is more even and the grid’s tempo a little stricter. There is no ink to soak softly into the page. Toner sits sharply on white paper.

In a 2016 interview with Robert Wood in Cordite Poetry Review, Alan Loney talked about letters and spaces. “To effect a word-space in letterpress printing is to insert a piece of metal, a shank made of lead, after the end of a word and before the next word starts… In a page of type, the space at the end of a paragraph is a row of lead spaces from the end of the sentence to the end of the paragraph line. And the irregular spaces at the ends of unjustified lines… are all rows of irregular metal spaces. When the type is ‘locked up’ or held together in the press for printing, the overall shape of all the metal, letters, punctuation marks and spaces, has to be a close to perfect rectangle of metal, a shape which might bear little relation to the actual shape of the words as they will appear on the page.”

The letters, shanks, formes, quoins and chases which Loney locked into a back-to-front positive of Imogen are all dispersed and gone now. Perhaps it would be possible to reassemble them – to get the band back together – but we have chosen to start afresh with this cover version. And, fittingly, the book’s cover is a key part of the story. Printer Brendan O’Brien of Fernbank Studio worked closely with Joanna on a number of her later books and has designed and printed a new cover for this edition of Imogen. His process? Letterpress, exactly as practised by Loney and generations of printers before him. The cover is also hand stitched, just like the 1978 edition.

The new technologies do not point towards the extinction of the old or the eclipse of their values. Loney himself says, “I still make books in exactly the same way I did before the computer entered my life. But a number of other printers, particularly in the United States and Germany, have learned well how to add contemporary laser, computer and digital technologies to traditional technologies in the making of specific books. And I do believe it is the conjunction of the traditional and the contemporary that has the greatest chance of preserving the art/craft of the book, acknowledging its 2000-year history as what gives us leave to even think about the word ‘book’ in the first place.”

Note: A descriptive bibliography of Alan Loney’s printed books will be published by Opifex Books later this year.